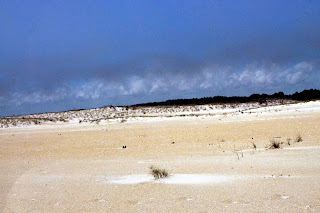 We have always marveled at the Jekyll and Hyde aspect of Assateague Island. The MD end of the island is narrow, mostly sandy beach and low scrub brush.  This long narrow spit of land has miles of marshy grasslands and numerous hummocks, also called islands, just off shore in the bay. By contrast, the VA end of the island is much wider with a short and narrow sandy beach. The marshlands are also expansive but the middle of the island supports heavily forested areas and the bay between Assateague and the mainland is island free. As we progressed mile after mile down the beach on the OSV road, we could see the changes.

Almost immediately, the dunes became taller, healthier and more alive with erosion impeding growth. Eventually the scrubby bush and stump pines gave way to the much taller Loblolly Pines and even some hardwoods. Close to Stateline is a healthy freshwater marsh, an intact ecosystem complete with cattails. This freshwater source is a great resource for the small bands of horses that inhabit this end of the island where other bands make due with brackish water and puddles after a rainstorm.
Our trip over sand not only gave us a look at the different layers of agency dealings, Enforcement Officers, Park Rangers and Natural Resources People all working hand in hand to keep the park pristine. It also reminded us of things they are unable to prevent such as the natural process of a barrier island adjusting to weather and it’s movement by the tides and storms. During Hurricane Sandy, the entire island was subjected to a massive tidal surge. As a result, many of the aged trees in the middle of the island are showing signs of salt toxicity and are dying off. We think of Barrier Islands protecting the mainland but they must also handle a great deal of abuse from weather during it’s life. Assateague Island is not where it was 50 years ago and will continue to move over the next 50. The animals that call this place home, the White Tailed and Sika deer, rabbits and the horses, have a pretty tough life. I’ve spent some time here now and will always wonder how the island is dealing with that next Atlantic storm, summer or winter.
Posted by Valerie Hill at 11:54 AM No comments: 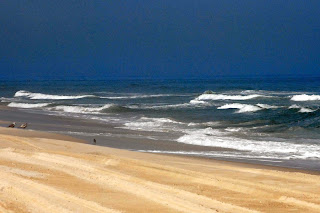 When most of the National Seashore is only reachable by traveling through sand with a special permit and appropriate gear, you miss the real flavor of the island unless you can travel that sandy stretch. Since we’re not sure about my Toyota Tundra’s worthiness, we’ve never spent the money for the permit but have always wanted to go.

One of the rangers, Betsy, offered to drive us out, show us a couple of back country camp sites and give us an idea of what the rest of Assateague was made of so we hopped into her government vehicle and spent the first spent 20 minutes letting 65 lbs of air out of each tire. Regulations and just plain sand smarts require you to run with only 15 lbs of pressure in each tire. The theory of squishy tires providing more surface contact is a sound one and more importantly, it seems to work for the majority of travelers. The trip out was full of new scenery, lots of birds, and more than a handful of people fishing and enjoying the sun. The Over Sand Regulations allow for no more than 145 vehicles out there at one time, 12 per mile,  and there’s a numbered gate to control access. Once the counter hits 145, the gate won’t open until someone comes off the sand knocking the counter to 144 and allowing the next person access to the route.

Natural Resource Officers and volunteers have marked places on the sand where the endangered Piping Plovers are nesting and have installed pipes with large signs every 10 feet around the closure. Nesting is a euphemism since they do not construct a nest but lay their sand colored eggs directly on the sand. Occasionally the birds will define their site by using bits of shells. Travelers on the sand have to pay attention and drive around these closed sections of beach. On our way back, we noticed a 4 wheel drive vehicle traveling  right down the middle of one of these closed areas. Betsy flew out of the vehicle, read the guy the riot act, contacted Law Enforcement to pass on make, model and tag information of the offending vehicle and then let the guy go on his way with a smile. I don’t think he had any idea there would be a ranger with a ticket book and a gun waiting for him.

Betsy took us to one of the back country campsites called Green Run, a nice little campsite in among the pines that will accommodate up to 15 people. There are picnic tables, fire rings and pit toilets for their comfort. The Campground rangers even drop off some firewood at the beginning of the season. This site is fairly close to the water if you wanted to kayak in otherwise it’s an 8 mile walk through the sand.

We continued down the beach looking for dolphins, eagles and other marine wildlife and while the surf was spectacular, all we found were sandpipers, laughing gulls and more than a few common gulls waiting for the fishermen to clean any catch they might land.

Our next stop was a piece of property off limits to campers and hikers but park employees use this location as a staging area for work being done near the VA border . We’re told this property was once owned by the Valentine family giving it the designation of “Valentine” to the park employees. There is a rundown camp, perched high on pilings, at the site which used to have electricity running to it back in the day. In fact, there are numerous cabins hiding all over the island. With the amount of marsh grass, slimy puddles and high tide debris lines, there was more than enough evidence to suggest this site was under water during higher tides. Out in the bay I noticed a small band of horses grazing near the VA / MD border fencing. Through my camera lens I could see there were 2 pintos, a light bay, a chestnut and a very dark bay stallion. They noticed us almost immediately but stayed where they were, the grass being much sweeter on their side of the marsh. Later, back at the camper, I was able to determine the dark bay stallion had a slash of white running down his left shoulder which looked more than a bit like a bolt of lightening. I must mention here how bad the mosquitoes were because the campers never feed them at this location so we abandoned the wait for the band to graze a bit closer in favor of the sanctuary of the truck.

We returned to the entrance/exit area and found a Ford Taurus about 10 feet inside the gate buried in the sand up to it’s frame. The  owners were naturally embarrassed and waiting for Law Enforcement to try to pull them out with a chain, saving them the expense of a tow truck. They were still going to get a couple of fines but their wait was prolonged by Law Enforcement because he observed a questionable vehicle leaving the sand. The guy stopped to put air back into his tires and the officer administered a field sobriety test which the driver failed. He was arrested, on site, for DWI and the befuddled driver wanted to know when it became illegal to drink and fish. The officer calmly said, “when you climbed behind the wheel to drive”.

The Ford Taurus could not be pulled out by a chain and had to wait for the tow truck. I believe it will be a while before they try a stunt like that again.
Posted by Valerie Hill at 5:00 PM No comments:

Nature And All It's Wonders

We finally have a few days of high 70’s with bright sunshine and it falls over our two days off so our plans would take us to the Ocean City Visitor’s Center to find out about fishing trips. This is our 4th visit to the area and Carl really wants to go deep sea fishing for Stripped Bass. Wouldn’t you know, the boats don’t start running until May 15. That’s the day we leave for home. And on top of this bad news, three bands of horses have made themselves pretty scarce over the past week. Instead of seeing more as the weather warms, we are seeing less.

But every evening, the Cardinals come out to feed in the open area near our camper and we see the same two white tailed deer, a mother and skipper ( last year’s youngster ), emerge from the brush to feed on the grasses. Most evenings but not all the chestnut stallion and his 4 chestnut mares graze their way through. And on very rare occasions, there is a lone stallion who is in the area to see if he can steal a mare or two. So far neither the white and brown pinto, Bodacious Bob, or the single chestnut, Corky, have been successful.

Also I have an update on the killdeer mother who sat on her nest through horrific rainstorms and gale force winds. We’ve watched for three weeks as she stood up to the “horse giants” roaming through the countryside. Sometime during Friday night or early Saturday morning, the four little speckled eggs hatched. Sadly, we were on duty and didn’t get a chance to watch them dry off, stretch their tiny little legs and then leave the nest area for the very last time. Another camper managed 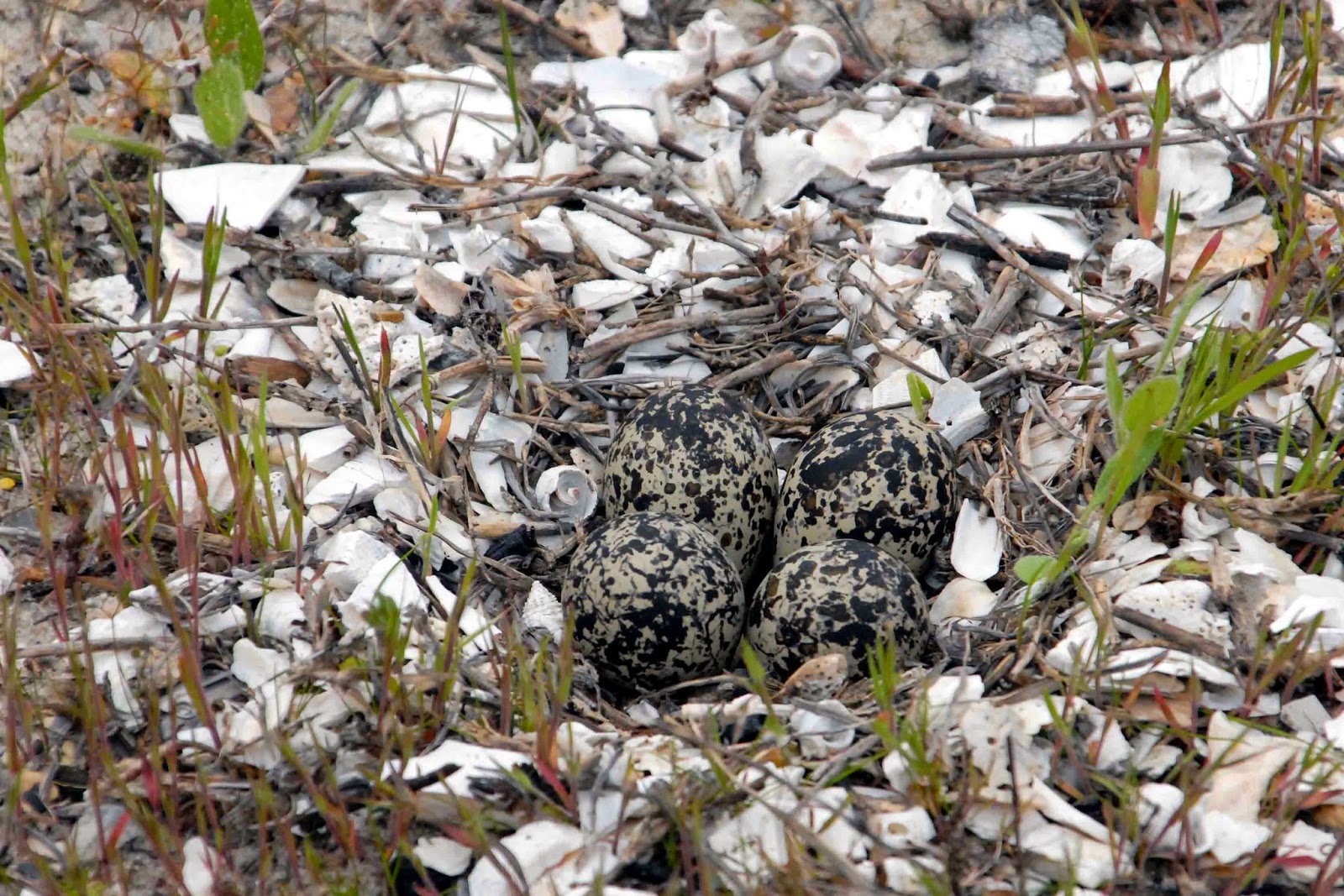 to catch a glimpse of 4 tiny balls of fluff running after their mother as she disappeared into the tall grass on the edge of the marsh.

I figured I would complete the saga with a photo of the empty broken shells but Carl said nature had already absorbed the shells back into the environment.

Posted by Valerie Hill at 2:30 PM No comments: