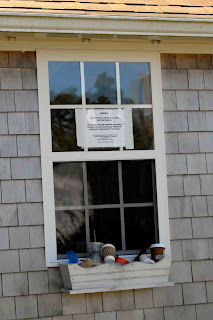 After packing up last evening, we traveled as far as Lebanon, NH and spent a quiet but windy night at the Wal-Mart. Then it was up and on the road by 8:30AM. We hit very little traffic until crossing the Cape Cod Canal over the Sagamore Bridge. Now, this is a normal choke point for vacationers headed both south and northbound but today was worse than usual. They’re doing bridge maintenance and have restricted the travel to one lane in each direction. Once past the bottleneck, it was good going. We hit the “Closed For The Season”  Barnstable rest area for a camper lunch and I couldn’t help but notice all of the trash thrown about. Apparently, it’s okay to toss your trash even if there’s no barrel to put it in. Always looking for an interesting angle, I spotted the window boxes on the building growing soda and thick shake cups. Just couldn’t pass up a photo like that. We found out site at the Adventure Bound Camping Resort-Cape Cod in North Truro, MA and settled in for a few days. Carl is thrilled because they have cable TV and I’m not upset because one of the stations is NESN. I can watch my Red Sox. They are also supposed to have wi-fi but I haven’t had any luck getting connected. The weather isn’t looking good for tomorrow. We’ll have to find indoor things to keep us busy.
Posted by Valerie Hill at 7:30 PM No comments:

First Show Is A Bust


Well, to say the weekend was less than successful is an understatement. The weather in St Albans, next to Lake Champlain, was blustery, cold and at times, snowy. The people who bothered to come out for the event were driven inside. We made no sales on Friday even though there was a half decent flow of potential customers. Saturday, normally the busier of the three days, seemed to be much quieter than other years. I spoke with other vendors who basically confirmed what I was experiencing.  Sunday didn’t disappoint with it’s tomb like qualities although the organizers of the event moved the popular parade to Sunday in hopes of drawing more people out. The winners of the weekend, well there’s no surprise there. The crafters who sold food did very well while us nature photographers didn’t break even. I sure hope this isn’t a sign for the entire season.

Posted by Valerie Hill at 8:28 PM No comments: