Dreary With A Chance Of Overcast 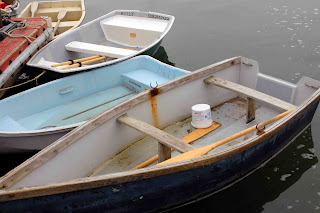 The results of last night’s game was not as exciting as the previous night but the weather has modified a bit today. There is still a serious pileup of clouds which will be with us for a while.  At least the driving rain has let up so we’re off today to visit a couple more lighthouses as well as some of the beautiful fishing fleets, harbors and beaches on both the Atlantic side as well as the bay side. We started with a visit to the Nauset Light, another of those moved back from the original position because they were threatened by serious cliff erosion.  Since most all ships now have GPS, the role of the lighthouse has slipped further back into the history books. Gone are the days of the lonely keeper ever on duty to provide a beacon to ships in danger of piling up on the rocky coast. From there we drifted on over to the Chatham Light next to the Coast Guard Rescue Station. Signage here told of the Mayflower’s trip from England, their landing near Provincetown to take on their first fresh water in more than 65 days and their eventual trip northward to Plymouth. Maybe I was absent from school the day they talked about the original land charter being nearer to the mouth of the Hudson River but due to a rip current, they had to turn around. The history of this area would be very different otherwise. During a short stop at the commercial fishing harbor in Yarmouth, we visited with a fisherman who was repairing holes in the drag net he uses to fish for squid. We talked about the bum rap most drag net fishermen get. His little net does not disturb the bottom or wreck coral. In fact coral, if it were even in the area would do more damage to his nets. He even commented on the impact the huge commercial drag net operations have on his livelihood. These factory ships impact the fisheries regulations as well. At another little harbor, I got permission from the harbormaster to go out on the floating docks to get closer to a resident swan, recently returned from it’s winter grounds. I took more than 20 photos over a 15 minute period but all she did was preen her feathers. Actually, I think she was a bit camera shy.  I can’t say enough good things about the local Chamber offices we visited. The one in West Yarmouth helped us find a place to fill our propane tank for the camper and directed us to a little out of the way place called Gray’s Beach. The Bass Hole Boardwalk juts out into the marsh area allowing access to tidal flats one wouldn’t normally be able to view. We watched several shore birds wading through the canals searching for bits of crab, clams and fish. The sun popped out just in time to turn the incoming water from that flat cloud cover gray to a bit more interesting steel blue. The dunes in the distance provided an interesting contrast. The patches of blue disappeared almost at once making my question to Carl about sunset photos moot. There will be no sun visible to set. Our last stop for the day was at the Truro Vineyards where I enjoyed a wine tasting seminar, including commemorative glass for just $10.00. This isn’t the way most vineyards we’ve visited do things but it was effective. I became convinced I had to buy a bottle of  a semi-dry white. Turns out this particular wine isn’t even made here.

Posted by Valerie Hill at 6:30 PM No comments: 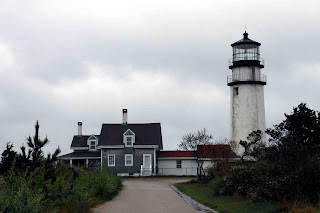 The Red Sox won last night which makes me a happy camper. What doesn’t make me happy is the meteorologist chose today to get his forecast right. We’re getting hammered with high gusts of wind and driving rain from the southwest. Now, our plan of attack for today is to find an information booth that’s open for directions to stores and restaurants. No luck on that search but we did eventually find the Provincetown Chamber Of Commerce after driving the wrong way down a one way street ( with a policeman’s permission ) and backing into a parked car’s rear tire ( Thank God ). No damage done from either event. We found the local Stop and Shop for a few groceries, ate at Napi’s Restaurant and had what I considered to be the best Clam Chowder I’ve had in a very long time and managed to get soaked while grabbing a few photos of the Atlantic side of the shoreline.  A small break in the weather provided us the opportunity to grab a quick photo of the Highland light, near our campground, which has been moved several hundred feet back from a seriously eroded cliff.  The rain continued at an impressive rate aided, no doubt, by the wind so we called it an early day.

Posted by Valerie Hill at 8:00 PM No comments: